I finally got around to watching this after a walking buddy recommended it, saying “It’s written and directed by Aaron Sorkin – you will love it.”   He didn’t mention it also features fascinating performances by Eddie Redmayne and Sacha Baron Cohen. He was right.  It is excellent.

If you were born in the 50’s era you lived through not only this trial, but the times this trial was all about.  Documentary films bringing such recent history to life are compelling and this one does its job very well.  This film is worth watching.  I recommend it highly.  The Vietnam War divided America, separating friends and tearing families apart.  Disagreements with my father about the war led to bitter arguments and our relationship took years to recover.  It bothered me a long time he never admitted I was right.  But watch the film because it so perfectly captures the late 60’s, the cars, the clothes, the attitudes and most importantly, the sense the country was standing at a crossroads and nothing would ever be the same. It never gets heavy-handed or preachy.

Last point:  Jerry Rubin stayed overnight in the same house in St. Paul I was crashing at when he was in town to speak at a big protest rally.  It may have been the protest I wrote about HERE. 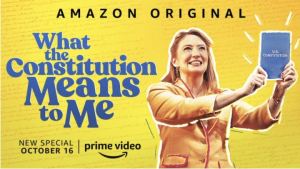 “What the Constitution Means to Me” is a video adaptation of an award-winning play (Pulitzer Prize finalist and received two Tony Awards) and it makes the transition to film well.  It centers on Heidi Schreck as a 15 year old who earned her college tuition by competing in Constitutional debate competitions, sponsored by the VFW (Veterans of Foreign Wars). It turns out one of my good friends participated in these debates and was able to add a good amount of color that enhanced the experience for me.

Reviewers have called it a work of devastating clarity: Funny, compassionate, surprising and optimistic. My recommendation is somewhat reluctant as some might find it painful in parts, but one comes away knowing a great deal more about the document that defines our political landscape.  As a high-school debater, I was flooded with memories of the ingenious way in which debates reveal so many sides of an issue.  The play is impeccably structured with a scintillating script that provides an amazing experience as it unfolds and the amazing ending.  I especially recommend it to anyone with a daughter, or who is a daughter or has had a mother.  Watch it for them. You can find it on Amazon Prime Video.