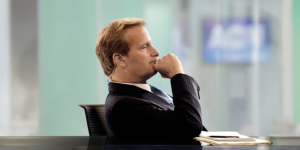 Let me be clear up front, I am not recommending you go back and watch this Aaron Sorkin created TV drama from 2012-2014.  However, there is one scene I’d like you to check out.  The scene features Jeff Daniels in his role of news anchor Will McAvoy, being interviewed with two politicians at a local college.  The part I’d like you to pay attention to comes 2 minutes and 10 seconds into this 5 minute clip, if you want to skip ahead. The current political divisions in the country inspired this idea.  Hear me out.

What bothers me is why acknowledging the lack of US supremacy on even the smallest item somehow is translated into “you hate our country.”  Coaches on a sports team look carefully at other teams to see where they’re deficient; always trying to find areas to improve so they can become the best.  That doesn’t blemish their team loyalty, does it? During my years building high-tech companies, we used radar charts to aid competitive analysis.  These charts highlighted our assets and liabilities, forcing us to focus on shoring up weaknesses while capitalizing and leveraging our strengths.  Acknowledging someone else performing better in a particular area was an opportunity to examine what they were doing and figure out how we, using our creativity and innovation, could get better at it than them.  As it says in this clip, it starts by understanding the problem.

What if we, as US citizens, came up with a scorecard to honestly rank ourselves against other countries?  A list might include some of the things below.  Then, every four years, before an election, we ask the administration who’s asking for another four years, how they did on the scorecard?  Of course we’d want to stick to metrics easily measured and difficult to fudge. A host of domestic and international agencies are well-equipped to make calls like this.  If a concern arose that scores may be less than honest and precise, do what they do at the Olympics: hire a dozen firms, six chosen from each political party and when the ratings come in, throw out the highest and lowest rankings and average the rest. Easy!

Here are some ideas on measurable things that could be on the scorecard:

This is just a quick start to provide some ideas.  You might have some as well.  Maybe it eventually leads to the Top 50 (or Top 100) attributes making up a great country.

At the end of their four years in office the President and his administration, would be forced to stand up and say, well, in the area of X we moved from #16 in the world to #9, and in area Y we moved from #4 to #1.  Now, we ran into a problem on item M where we went from #17 in the world to #22, but let me explain what happened and why.

I’ve no idea if New Zealand has any sort of formal scorecard, but I found this video of New Zealand’s Prime Minister summarizing her accomplishments and making the case for another term rather interesting.  If I were a citizen of New Zealand, I think it would make it clear to me if I would want her in office for another two years.  Some will find this compelling and others, repugnant, I suspect. What did you think about her focus? On the right things? Unlike the above clip from a television series, this one is actually the real deal, no high-paid writers, no Aaron Sorkin, just reality.

My hope if this idea got legs and were to come to pass, we would see politicians start to work on the things that help our country with citizens holding them accountable for moving forward and getting things done.  It might very well cause a shift in focus to the things that really matter in government and less on the things that don’t. My two cents and deepest apologies if this is too political.

Epilogue: Everything that happened during Jacinda Ardern’s first two years in office, occurred during her pregnancy and delivery of her first child.