Here in Arizona, our house overlooks a golf course, as do 84.4% of all homes in Phoenix (just kidding). But neither Maggie or I play. In fact, if you asked any of my golfing friends “Does Steve play golf?” the most likely response would be “Not so much.” This story is not about golfing, although I suspect both golfers and non-golfers will find something of interest.

Living in the Twin Cities from 1997 – 2003, after joining the founding team of Net Perceptions, we purchased a nice home on Bent Creek Golf Course in Eden Prairie. I loved the unfolding deep green lawn stretching from my backyard seemingly to forever. Better was it never needed my non-existent gardening ambitions. Our deck overlooked the green of the first hole, a 520 yard, Par 5, providing hours of entertainment. Being the first of 18 holes, the final players of the day passed our home pretty early. This allowed me to take a bucket of balls after the concluding golfers had passed and chip them from my backyard onto the green. Then I would step up onto the green, and putt them all into the hole.

While never playing the course, I got along well with the club management, pro and groundskeepers. Once they’d needed to use our lawn for some sand trap repairs and I’d made it easy for them. I knew most of the groundskeepers and waved every morning as they made their rounds. One time I noticed an older guy operating one of the riding mowers. That seemed odd. All the rest of the crew appeared college age and in pretty good shape. This guy was neither. I never spoke with him, but asked about him one day at the club’s golf shop. After describing him, a look of acknowledgement came across the course manager. “Oh, he’s not a regular groundskeeper; he’s one of our members. Due to all his DWI arrests, he’s lost his driver’s license. But he misses driving. So, his wife brings him over here and we let him drive the mowers around.”

Although not a true golfer, I’d become familiar with the game during my five year stint at AT&T, where golf is part of the culture. Not only were deals done on the course, AT&T sponsored golf events (Pebble Beach Pro-am for one) and invites high-value clients and arranges for them to play a round with a genuine professional and AT&T executives. Like it or not, I was expected to attend and play. While no need for me to be a stellar golfer, embarrassing the company by shooting a poor game was also not acceptable. After several lessons and lots of practice, my game settled into one where although never hitting the ball very far, I always seemed to hit it straight. It turns out this often resulted in a half-decent score, especially when playing with those who tended to plaster the ball a great distances but in all the wrong directions.

My golf clubs were purchased used for $15 at a garage sale in the early 90s, and I never really thought much about them. When going to an event, I threw them into my trunk, and then onto a cart. Perhaps someone looked a bit askance at my clubs now and then, but after seeing Rodney Dangerfield’s bag of clubs in Caddyshack, I was glad the size of my bag was at the other end of the spectrum. For at least 10 years of playing and a good number of prestige events, those were my only clubs.

As it turned out, Net Perceptions was a success, and went public in 1999, just before the Internet bubble burst in 2001-2002. Before the crash, it appeared I had a great deal of money, although most of it was on paper and in lock-up agreements. One downside of suddenly acquiring a big chunk of money is the mistaken belief you’ve also acquired extra brains in the process. This leads to thinking you must have the magic touch when it comes to picking investments. Of course, those opportunities are being thrown at you right and left by people whose business it is to follow newly-rich people around with the goal of snapping up some of that loot. This is how I was exposed to and made a $25,000 investment in a company that manufactured custom golf clubs.   Here is how the scam, oops, I mean “business model” worked.

It begins with a desperate-to-improve golfer in a golf shop talking to the local pro on ways to improve his game. Everyone knows buying something, like special long-range balls, or the “super driver of the decade” or the “magic putter” which makes all putts roll accurate and true, is much simpler than taking lessons and actually practicing. And so, sales are made. It reminds me of the story of the couple passing a talented piano player at a bar, leaving a tip as they depart and saying, “Wow! You were just great. I’d do anything to play like that. Well, except take lessons and practice, of course.”

Back to our story: At some point, the pro suggests the stock off-the-shelf clubs the player is using may be holding him back. What might help is a special set of custom-made clubs, where grips are tailored specifically to the hands of the player, the shaft lengths cut to fit the player’s exact height and the heads all angled for his particular sweet spot. “Expensive?” he asks. “Oh my, not really, and think about consistently shaving half a dozen strokes from each game,” the pro replies.

A full set of top brand irons typically ran about a thousand dollars then, and the fully-customized set with a fitted set of shafts and grips was about $2,000. So, the pro arranges for a “fitting,” using the computer software, camera and other goodies provided by the company in which I’d invested. Once the company got the specifics for the golfer, they tweaked their stock shafts, clubs and grips to match the order sheet, applied the logo of whomever’s brand was specified (Callaway, Ping, Wilson, etc.) and then, finally, the most important and perhaps costly step, packing them up to look like high-value works of art. 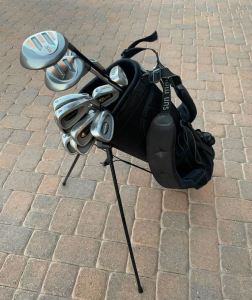 Part of my $25k investment was a set of custom clubs. They would arrange for me to go to the factory—which was local—and be personally fitted for a set of clubs and receive those clubs for free. Of course, at this point, I already knew the cost from the business model was around $200 bucks, but still, I couldn’t resist “free” and was on time for my appointment the following week. Arriving on Saturday morning at the company’s warehouse-like facility, I removed my clubs from the trunk of my car. They’d asked me to bring the set I currently played with, perhaps as some sort of baseline—I wasn’t sure. But I hefted them onto my shoulder and strolled through the wide open double garages of the warehouse space where I was welcomed by the investment guy and one of the measuring pros. The pro grabbed my bag, looked at it and said, “Oh, Mr. Larsen, you must have grabbed the wrong bag, these are lady’s clubs. Did you pick up your wife’s clubs by mistake?” When I looked at him quizzically, he said, “I’m serious, these are Mickey Wright signature clubs.” Apparently this Mickey Wright logo I’d been seeing for the past decade wasn’t some famous male golf pro, but a famous woman golfer. Oh god. Do you recall the scene at the end of the “The Six Sense” when Bruce Willis’s character flashes back on all those scenes, realizing he actually wasn’t in them and redefines the entire film, giving it a whole new meaning? My mind flashed over years of looks from other golfers and caddies as they saw my clubs, then shot a look at me, then again at my clubs. 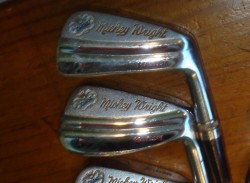 Duh! It finally hit me—what all those funny looks were about. Upon reflection, it came home to me that acquiring money doesn’t make you any smarter than you were the month or year before. Unfortunately, the market crash and subsequent IRS issues wiped out any semblance of my “being rich,” which in the long run, was probably all for the good. I stopped looking for homeruns and returned to saving at least 20% of any money that came my way and while perhaps not the “smartest” play one can make financially, it’s consistent with my values of hard work, persistence and determination. In the end, they’ve always served me best. And I stopped playing golf and gave my $25,000 clubs to my cousin.