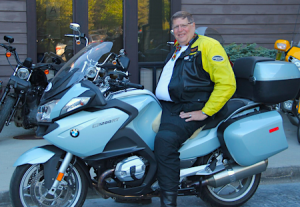 Late last year I was talking with my friend, Rich Marin.  Rich is recently “sort-of” retired.  Although moving from New York City where he’s spent most of his career, to his new permanent residence near San Diego a few months back, he’s not yet grasped some of the key aspects of “being retired.”  His level of activity in retirement roughly equates to 2+ normal full-time jobs, one part-time gig and a host of demanding past-time activities, one of which is writing and publishing a 1,000 word column every day.  Rich’s commitment to daily writing and keeping his friends informed about the things he thinks about was a good part of the motivation for getting this newsletter going again.  If you are so inclined, you can subscribe to Rich’s daily blog post here:  https://oldloneranger.com/

In our conversation, we discussed an upcoming motorcycle ride in May of 2020 with a group of friends that have been riding motorcycles together for twenty-five years. Rich felt this silver anniversary ride along some of the group’s favorite south Utah roads needed something special to commemorate it, beyond a T-shirt or logo’d scarf.  Rich proposed pulling 25 years of ride reports and stories from over 50 rides into a book and surprising everyone with it at the May event. Would I help him edit it? Of course, I would. Many people have trouble saying “No” to Rich Marin and me perhaps more than most. And so the project began.

The amount of work involved in writing any book is greater than people realize.  There are several book authors on this list, so you know of what I speak. Pulling together stories written over twenty-five years, even when the majority are from one author, involves logistical complexities on the level of building a multi-story house – with a pool. Fortunately, Rich has written and published several books before this, so he knew what he was biting off.  Rich had a pretty good idea of what he wanted, what he cared about and what he didn’t, making my editing work fairly straight forward once that got sorted out.  Rich ended up doing all the heavy lifting.  It turns out I had a good number of pictures to contribute along with the more boring and typical editing tasks – spelling, grammar, word usage, echos, page numbering and chapter headings, etc.  Best of all, I was pleased to write a foreword to the book, a first for me. I’ve written many dust jacket blurbs; this was my first foreword and I enjoyed doing it.

Rich’s book is terrific.  It will be of greatest interest to those who know Rich Marin. If you’ve ridden with him on any of these rides, it will be an absolute joy.  When coronavirus dark clouds began forming around the upcoming May ride, Rich couldn’t stand the thought of his friends not being able to read what he’d put together.  Also, assuming the coronavirus situation may have resulted in said friends having some excess time on their hands, he rushed to the post office and mailed copies of the book to the AFMC family and they should all be reading it by now.   If that does not include you, and you wish to purchase the book from the publisher, you can do that here for less than $30:  http://www.lulu.com/shop/richard-marin/the-ride-is-all/hardcover/product-24435231.html

Here is what the publisher had to say about the book: “This is a book about a group of avid motorcyclists who have banded together for twenty-five years of riding all around the world. They adhere to the principle of High Mileage and Low Expectations based on an early manifesto compiled in a Vermont barn over too much alcohol and good times. The tales and the characters evolve and age as time passes, but one thing never changes. The ride remains all.”

I’m super impressed with what my friend Rich has accomplished and proud of the small part that I was able to play.  Below is the Foreword I wrote to Rich’s book:

Rich Marin is a large man. Not just big, he’s BIG.  When he was eight, they thought he was twelve.  At fourteen an orthopedist told him not to play tennis until his tendons caught up with his size.  At sixteen he stopped fitting into off-the-rack sizes.  He started college at 310 pounds and was recruited to join the football team.  As an adult, the issues he confronts due to his size are impossible for those of normal size to ever imagine.

Marin’s bigness may be the single most significant aspect determining his life’s course.  Jobs he took in college, girls he dared ask out, the motorcycles and cars he bought and the clothes he wore, all were governed by his prodigious size.  If clothes make the man, then size picks the clothes that make the man.

Few traits determine character more than size and riding a motorcycle. Rich came to motorcycles as a youngster in Italy. Not only did motorcycles provide freedom, he rapidly learned how fast they would go and how quickly they could turn and stop. On scooters and small cc motorcycles, he learned to thread through the narrow streets and backroads of Rome, across slippery cobblestones, chasing guys his age. Given his extra size, he subconsciously developed a set of advanced riding skills, ensuring he was never at the back of the pack. Marin has never tolerated being at the back of any pack. His place is–and always has been–at the front.

Being at the front by itself, however, does not make a leader. Marin’s leadership of the AFMC (American Flyers Motorcycle Club) has never been questioned.  One reason is his willingness to play the Tourmaster role (including the hard work of setting dates and ride locations, booking hotels and scouting restaurants, evaluating and then outlining a route map). No other members are really up to this.  For those who’ve taken this on, and only a small number of brave AFMC members ever have, they’ve rarely done it again. Except for Seattle Bob, who’s done it twice (Salmon Run and Montana/Idaho), and me, who’s done it three times (North California, Arizona and Copper Canyon), this is not a project to which anyone willingly signs up.

Few tasks besides parenting involve so much work with so little thanks. You set up a perfect route with awesome roads, spectacular scenery, and blissfully comfortable hotels, but then pick one restaurant having a bad night and the group is quick to point a finger and wonder amongst themselves how one person (the Tourmaster) could be so totally inept, blind and incompetent to make such a horrific error.  I suspect the number of times he’s heard sincere expressions of thanks and appreciation at the end of a ride are few.

But Rich’s leadership goes far deeper than the willingness to do the hard and thankless organizing tasks.  From my very first ride with the Flyers, Rich’s unshakeable self-confidence was indisputable. Rich inspires confidence in others because he has so much of it himself. On my first ride with the Flyer’s out of Las Vegas to northern Arizona through winds so strong we had our bikes leaned far over to keep moving straight, not once did I worry we may not reach our destination.  Rich said we’d be fine, and that was all we needed to hear.  Only later did I learn trucks exiting the freeway that afternoon were not allowed back on.  Rich’s self-confidence is not the “big ego” sort of confidence, but the organic, home-grown confidence of someone who has done it before.

Another thread weaving through Rich’s leadership style is honesty. He just doesn’t make things up and he’s rarely wrong. He’s not a fun guy with whom to argue. His retention and recall of facts is extraordinary. On a recent Greece trip, we arrived in Delphi and were getting off our bikes at the hotel, and I asked Rich to confirm my hunch that our final leg the next day, back to Athens, was pretty short.  Now, for most of us, after 11 days of riding, the distance for any particular leg of a trip has gotten pretty mushed together and foggy.  Without hesitation, Rich said, “Yeah, pretty short, only about 185 kilometers or so.”  As he saw me doing mental arithmetic he said, “Less than 120 miles, 2-3 hours at most.”  Of course, he was spot on, which when it comes to cities, distances on a map and their general direction, he is always exceptionally precise.

A lot of Flyers like to ride close behind Rich although not many keep pace with him for long. My theory is they trust the clarity of Rich’s vision on where we’re going, more so than anyone else in the group. Rich’s sense of what not only a single day’s ride represents, but an entire trip, is a unique part of his intellect and no doubt a key part of what led to his highly successful business career. I suspect planning and executing these rides allows him to exercise and play with this part of his brain so particularly well-suited to these sorts of tasks. He may or may not be aware that not everyone shares his particular talent for creating a vision in his head consisting of an entire map with every stop notated, every hotel and restaurant pictured, and the time and distances to be covered.  Once he’s traversed an area, it’s fixed in his mind.  He knows the Moki Dugway is three miles long and has six switchbacks as well as the number of view pull-offs on the Burr Trail to Bullfrog and how long it takes to get down and back alone versus going with five riders.  Very few people can do this, and no one I’ve ever met is better at it than Rich. Did he have a vision in his mind twenty-five years ago of creating a group of motorcycling friends with which he would spend a good part of his life?  You’ll have to ask him.

The last attribute of Rich’s leadership profile is his unwavering support and loyalty to his inner circle of family and friends, and no one is closer to him than his fellow riders in the American Flyers Motorcycle Club. Some years back, Rich invested in one of my start-up companies. Not long after he’d made the investment, which I assumed was due to our brilliant idea and killer pitch deck, the company’s board decided to pivot in a new direction and asked me to step down as CEO. Rich called the chairman of the board and read him the riot act, demanding his money back.  It turns out he hadn’t invested in the company, he was investing in me. Without me in the picture, he wanted nothing to do with them.

This book represents the compilation of memories and ride reports from twenty-five years of the American Flyers Motorcycle Club. Nearly all of what you find here is written by Rich. He diligently wrote reports of each ride, memorializing them for all who attended.  On occasion, Flyers went on rides Rich was unable to attend and the contributions of the members who chose to chronicle those rides are also included here when those reports were found.

This book will hold the greatest attraction for those who know Rich Marin and if you’ve ridden with him on any of these rides, it will be an absolute joy to read. Like planning a ride, assembling all of this wasn’t a simple task, but Rich, thanks for doing it.  I think it’s great!